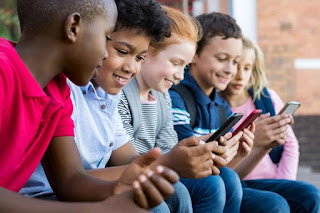 Youth are incredibly well-connected on social media. According to a 2018 Pew study, fully 95% of teens have access to a smartphone, and 45% say they are online almost constantly. This engagement is happening at younger and younger ages: In 2015, 24% of kids ages 8 – 12 had their own smartphone. That's up 41% from 2011, according to a recent study.
The phenomenon of social media use among youth has significant implications for youth rights and youth liberation.

For example, youth are politically engaged online. According to one analysis: "70% of young people had gotten information about the 2020 election on social media and 36% reported posting political content in the week prior."

This engagement has positive effects for those posting. The same survey found that "Over 60% of youth said that creating social media content helped them feel more informed, represented, and heard, although differences in these benefits exist across gender and race/ethnicity...Creating social media posts or online content about political/social issues that are important to them helps young people feel like their voices matter."

One of the few studies I managed to find was from 2006 (ancient in internet terms). Still, that study found that 64% of online teens are considered "content creators" --  by creating a blog, webpage, or sharing original content they created or remixed online.

Further, the content that youth create produces billions of dollars of value for large tech companies, as well as the corporations that advertise on their platforms. But most of the people making that content aren't seeing those rewards.

Of course, there are some exceptions. For example, this article shows how a group of young Black content creators and influencers is getting their due by living together in homes where they can collaborate, have control over their content output, and leverage their collective fame.

And it also seems that young people are beginning to demand, or at least wish for, more compensation for their content: 86% of Gen Z and millennials said in a survey that they would like to get paid to post social media content. One encouraging study showed that, in 2017, nearly 17 million Americans earned income posting their personal creations on nine platforms, an increase of more than 2.4 million U.S. creators, or 16.6 percent, in one year.

In other words, most of the monetary benefits from all that content don't reach the youth creating much of it.

Finally, youth are simply consuming a massive amount of content. Teenagers in the U.S. use entertainment screens on average 7 hours per day. When you consider the number of views, likes, streams, and other engagements that come with that use, it's clear that young people exert significant influence on what media gets produced and shared; youth shape culture.

So what does this mean for youth rights?

First, it means youth should be treated with more respect. Youth are actively shaping culture and society; their decisions and their creations are directing the future. Youth should be recognized as the agentic actors they are. This would mean, for example, increased autonomy in all aspects of life, and at the very least in the privacy of social media use.

Second, and similarly, it means being skeptical when people like the creators of the Social Dilemma engage in fear-mongering and make broad claims about how social media is harming youth, and therefore youth should have their access limited. Social media is one of the few meaningful political and social outlets for youth; the answer to our social problems isn't to restrict the access rights of young people.

Third, it means that youth (and all content creators) should be compensated for the value they produce.

Finally, I would suggest that instead of focusing so intensely on the ways in which social media impacts youth, more attention should be paid to the ways that youth impact social media. That project could lead to a better understanding of the ways that youth are actively contributing to and shaping society, and ideally would lead to more recognition of youth as capable humans with dignity and rights.